Is It Illegal For An Officer To Point Their Gun At Suspects?

Civil Rights Blog Is It Illegal For An Officer To Point Their Gun At Suspects? 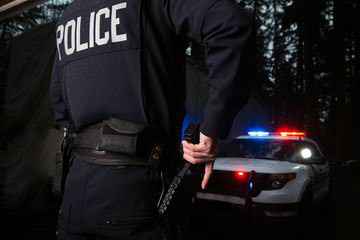 Is It Illegal For An Officer To Point Their Gun At Suspects?

Depending on the situation, a police officer may violate your constitutional rights by pointing a gun at you – even if only for a couple of seconds. For example, the City of Phoenix agreed to pay $475,000 to a family in 2020 after one of its officers approached their parked car with his gun drawn. As reported in the Arizona Republic at the time, the husband and wife were in the car with their two young daughters: “Next thing you know, a police officer . . . comes up, open the door, banging on the window with a gun, saying he’s gonna shoot us in the face, telling us to get out of the car.” According to legal papers, the police suspected the family only of shoplifting. This means that officers pulled their guns over suspicion of a minor crime.  [www.azcentral.com/story/news/local/phoenix/2020/08/24/phoenix-pay-475-k-family-viral-shoplifting-incident/3392305001/]

The Ninth Circuit Court of Appeals – the regional court covering Arizona – has ruled that “pointing guns at persons who are compliant and present no danger is a constitutional violation.” In one recent case, an officer forced a motorist to the ground at gunpoint during a traffic stop. The driver was told to exit his car. While the cop searched the car, the motorist calmly waited nearby. The officer found a loaded handgun in the backseat. Even though the driver wasn’t anywhere close to the back-seat handgun, the officer unholstered his weapon and allegedly pointed it at the driver. The officer violated the constitution because the driver did not threaten the officer and the driver was not suspected of a dangerous crime.

The same is true when cops enter a home. Officers have no more right to draw their gun in a suspect’s home than they do during a traffic stop. For example, a California man settled his lawsuit with a local police department for $150,000 after cops entered his home one night with guns drawn. Earlier that night, the man had caused a minor car accident and officers suspected him of drunk driving. By the time officers arrived at his home with flashlights and guns, the suspect was fast asleep in his bedroom. The man was startled to discover officers pointing guns and shining lights in his face. [https://patch.com/california/sancarlos/city-settles-hopkins-lawsuit]

Of course, an officer may be allowed to point a gun when there is a genuine threat to the officer or bystander. For example, if a suspect is holding a weapon, an officer likely acts lawfully by pointing his gun. Also, an officer is commonly allowed to hold his weapon in “low-ready.” Low-ready is when an officer has unholstered their gun and holds it down at their side in a tense situation. This is not the same as pointing a gun. Even when an officer is unjustified in pointing a gun, it may nevertheless be lawful for them to hold their gun in the low-ready position.

Not all instances of unlawful gun use will result in a large settlement. Each case is unique and requires careful consideration of the circumstances to determine whether police acted constitutionally.